Every year promises an array of comedies at the theater. It seems to be a really saturated genre, so it can be hard to know what’s really worth seeing. I am a big fan of both Melissa McCarthy and Jason Bateman, so it was a no-brainer to go check out “Identity Thief“.

Diana (McCarthy) is our identity thief. She lives the high life off of other people’s credit cards and driver licenses. One day it catches up with her when she steals the identity of Sandy Peterson (Bateman). He finds out she has a court appearance she missed, and he is now targeted by the police. Sandy has to bring Diana to the police so that they can take her in, and file her for identity theft. 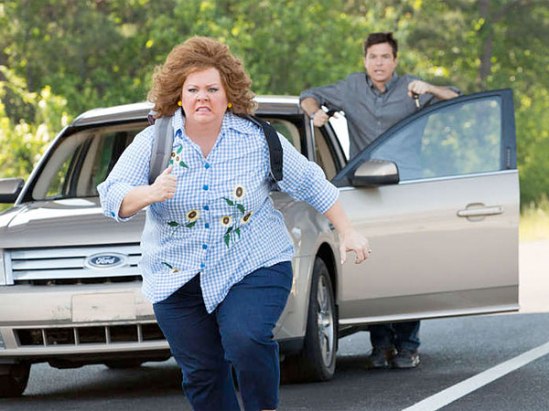 Sandy takes a flight out to Florida where Diana is located, and tracks her down and thus the journey begins to bring her back to Colorado so that she can face the authorities and own up to what she has done. What ensues are a series of pretty ridiculous events.

There are more than a few laughs in this film as Diana and Sandy clash as they cross the country. I don’t want to provide any spoilers, but there is a lot of physical comedy by the two leads. It is a weird combination, but it works. They really play well off of one another, creating, in a weird way, almost a buddy comedy, even though one is dragging the other across the country to turn them in to the authorities. Although there are quite a few laughs, the film does seem to be a little self-glorified and repetitive in parts. Diana’s go-to move is to punch people in the throat which was funny the first time, but was definitely overused. I love that Melissa McCarthy is not afraid to put it all out there in terms of her comedic style. She is exhausting to watch, because she goes and goes like the Duracell Bunny Rabbit. She was phenomenal in “Bridesmaids“. Jason Bateman has really made a name for himself with this type of comedy. Seth Gordon (Director) also worked with him in “Horrible Bosses” which is another comedy worth watching. I enjoyed the bit parts from Jon Favreau, Eric Stonestreet, and Robert Patrick. I cannot say the same about T.I. who is an absolutely horrible actor.

Overall, I felt like this falls into the category of “Popcorn Movie”. It’s obvious that you are not going to find any award-winning performances here, but that is definitely not what they are shooting for. This film is a solid addition to the comedy genre. If this genre fits your taste, it is worth a view.