Jake Gyllenhaal and Michael Pena head up Writer/Director David Ayer’s cop film, which takes place in Los Angeles, the same location for “Training Day”, the film Ayer wrote, and that was released back in 2001. It is hard to believe it has been that long. It was difficult for me to go into this film and not compare it directly with what was possible Denzel Washington’s most electrifying performance. So, admittedly, I am writing this review through that lens.

“End of Watch” follows two cops through their patrol on the streets of Los Angeles. We get to know them as individuals, including the ups and downs of their personal lives, and their pursuit to becoming “legit” street cops. There was definitely a lot of gunfire, a heck of a lot of language (yes, I did use “heck” on purpose), and some pretty disturbing scenes where the cops discover some fowl play to make some of the most hardcore fans shudder a least a little bit.

The dialogue in the film gets a little bit repetitive for me. It seems like we hack through the same type of thing over and over again. The cops bantering back and forth, getting in trouble for crossing the line, and things of that nature get old really fast. A lot of what they experience we don’t see the end result of. **SPOILER ALERT** To back up this opinion, there is one scene where the cops get called to a home and the lady of the house is panicking that her two small children are missing, and that they need for them to go out and find them immediately. There are two other men in the apartment. Upon investigation in the household, they discover the children duct taped and stored in one of the closets. This is one of those scenes that even the grittiest filmgoer would shudder at. My gripe is that the scene ends with the discovery of the children. Yes, we should be able to use our imagination and connect the dots as to what would happen next, but I felt like there could have been more given.

All of this being said, there is plenty to like about the film. It delivers what fans of these types of films want to see. Ayer has definitely found his niche over the years will films like the aforementioned “Training Day” as well as films like “S.W.A.T” and “The Fast and the Furious”. There is an emotional conclusion to the film that leaves viewers something to think about.

Anybody looking to go get a good dose of good guys and bad guys, with a helping of real-life drama, this may be the film for you. But you aren’t going to find anything here that you haven’t seen before.

I had a last minute opportunity to go and join a couple of really good friends tonight at a local movie theater to go see Alfred Hitchcock’s “The Birds”. TCM has been presenting classic films back on the silver screen over the last few years. In addition to Hitchcock’s film, they have presented “Wizard of Oz”, “West Side Story”, and the 70th Anniversary of “Casablanca”. Fathom was the event coordinator that lined up the series.

Hitchcock’s film brought newcomer Tippi Hedren to the big screen. She had been previously working in TV commercials and got the call from a producer to come and do a few screen tests. Little did she know she would be the leading lady in multiple Hitchcock films. Rod Taylor, Suzanne Pleshette, and the always-wonderful Jessica Tandy also joined Hedren on screen, completing a pleasing cast.

“The Birds” did for the flying creatures what “Jaws” did for sharks, and what Hitchcock’s previous film “Psycho” did for showers. There is a definite element of fear that is applied to something not normally thought of us as a threat. This is what Hitchcock always did so well. He took seemingly normal situations and placed normal people in increasingly abnormal circumstances. 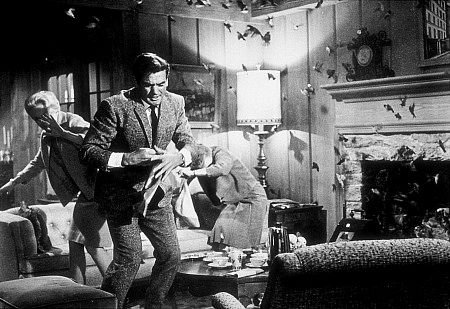 The film really pushed the envelope in some aspects, including the scene where the farmer (the neighbor down the road), was discovered, having been attacked by by birds and having his eyes pecked out and bleeding. But no filmmaker has been acknowledged as one of the greats for not pushing the said envelope.

The budget was the highest of any of Hitchcock’s films to that point. It is easy to see how this could be, with the seemingly endless amounts of birds, and the way in which the actors had to interact in these intense situations. Hedren admitted in an interview with Robert Osbourne that she was not aware in one of the final scenes in the movie when she makes her way upstairs in the home they are trapped in, that they were going to use some real birds to attack her. This is the scene where she nearly dies, but is drug out of the room by Taylor’s character.

“The Birds” most definitely provides some classic Hitchcock moments, and enough suspense to fill a 2-hour timeframe. While it is one of the films I consider most definitely worthwhile, it is not the best in the Hitchcock canon. That being said, no classic filmgoer will be let down by this entertaining film.

Horror fans are a different breed of film addict, and a bunch I’ve loved to follow over the years. Their addiction, I’ve found, brings with it a lot of great films, in fact, some of the best. Early on in film history such classics as “The Blob” starring Steve McQueen, or George A. Romero’s “Night of the Living Dead” were some of the entries that brought horror fans their fix. I will admit, the first time I heard “Barbara, they’re coming for you”, I had a chill run down my spine. However, in 1980, Stanley Kubrick changed the face of horror.

“The Shining”, a somewhat loose adaptation of Stephen King’s horror novel raised the bar of filmmaking. The film opens with a high shot of the Colorado Mountains (actual film locations were Oregon and Montana) accompanied by a rather eerie orchestration in which the listener can pull out voices bringing alarm to where they might be headed. It does carry with it the aforementioned chills.

We learn that Jack Torrance (played by Jack Nicholson) is driving up the mountains to a resort to interview for the caretaker position, in which he will bring his family for the winter months to keep the hotel in shape until the spring months when they will re-open. Little does hotel management know what they will find when they return for business.

The chilling part of the film isn’t even as much in the scariness of the subject matter, but rather it is in the way that Stanley Kubrick so meticulously planned out each shot. Garrett Brown was a huge contributor to the overall look of the film, through his creation of what is now known as the Steadicam. This allowed for the cameraman to essentially allow the camera to operate on its own arm, while the arm extends to a strap that is secured around the cameraman’s waist. This was the vehicle for the shots through the hallways of the Overlook hotel, and the classic conclusion to the film, out in the maze on the grounds of the hotel.

Another one of the great shots that Kubrick planned out took place in the kitchen of the hotel after Jack is knocked out by his wife, Wendy (played by Shelley Duvall). Jack was drug into the cooler, while his wife waited outside, contemplating her next move. Kubrick decided on an angle from the ground looking up at Jack, his hands on the door, begging Wendy to let him out. Of course, the name of Jack Nicholson can’t be mentioned without the phrase “Heeeere’s Johnny!” attached to it. And that phrase comes in the quintessential scene in the film when Jack axes down the bathroom door near the end of the film.

Kubrick’s horror masterpiece is widely acknowledges as the first epic horror film. This holds a lot of truth. The film lasts 142 minutes, and really takes the horror genre to a grander scale than it had ever been before, and arguable has been since, although there are a lot of competitors for that spot of greatest horror film of all time. In the opinion of this reviewer, it most definitely does take that spot.

Stanley Kubrick had a wide range of entries in his career. Nobody will ever forget “2001: A Space Odyssey”, “Full Metal Jacket”, or “Dr. Strangelove”. But “The Shining” most definitely holds its own, along with a very special place in film history.